Below are a few highlights from American Farmland Trust’s initial analyses of the new census data along with some explanations and clarifications of terms and trends we identified.

The Census of Agriculture tracks land uses on farm operations as reported by farm operators. Major categories include: total cropland, total woodland, permanent pasture and rangeland, and all other land including farmsteads, buildings, livestock facilities, ponds, roads, etc. Combined, these categories equal “land in farms.” From 2012 to 2017, land in farms dropped from 914,527,657 acres to 900,217,576 acres. This represents a 2 percent decrease, but continues a steady decline that has resulted in a 86,579,003 million acre decrease in land devoted to agriculture since 1982.

Declines in land in farms are concerning. Land that is no longer part of a farm may be more vulnerable to development; a shrinking supply of land in active agricultural use may create additional barriers for beginning and established farmers seeking suitable land (e.g., costs associated with clearing and restoring agricultural use); and a smaller pool of land devoted to agriculture may limit opportunities to establish sound farming practices and/or management systems. 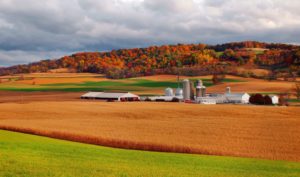 Net changes in land in farms can be misleading. They provide one measure of the magnitude of agricultural activity, but do not tell us what is happening to the resource base. Decreases in land in farms, for example, do not equate to or represent conversion; they indicate that land has been taken out of active production. This land is likely to be vulnerable to conversion, particularly in areas experiencing development pressure. A better source for information about development and dynamic changes in land cover/use is the National Resources Inventory.

Land in Farms by State

There could be a number of reasons for the decline: one is that producers who filled out the Census of Agriculture Survey either didn’t understand the question or may not have known whether their farm is under a conservation easement, especially if they do not own the land on which they farm. Another possible reason is that those farms and farmland previously included are no longer in agriculture or are no longer counted in the Census of Agriculture. It could also be that previous census data had included term easements, such as those in the federal Wetlands Reserve Easements program, or other kinds of easements.

Another limitation of the data for land under conservation easements is that they could include the number of farms and farm acres protecting a range of conservation resources other than agricultural land (e.g. wildlife habitat, wetlands, open space).The numbers are also problematic because there is no differentiation between land covered by easements that prohibit future agricultural use and those intended to keep land available for agriculture.

Changes in Conservation Easements by State

In the 2017 Census of Agriculture, NASS, changed the way it reports on individuals’ roles in farm operations to do a better job capturing their contributions. This led to more people being identified as “producers,” (which now replaces “operators”) and a jump in the number of beginning producers. 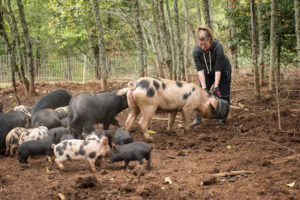 USDA defines beginning farmers as individuals who have been operating a farm for 10 years or less. The census historically only published data for operators with “fewer than 10 years of experience” and tracked “years on present farm.” These numbers were used by many entities to talk about beginning farmers. The 2012 Census of Agriculture began including “years operating on any farm.” In 2017 they created a new category of “new and beginning producers” that includes producers operating “on any farm for 10 years or less.” As a result of these changes over the years, it may be difficult to make direct comparisons from 2017 to 2012 or earlier. When making comparisons, be sure to compare similar items, such as: “years on present farm” vs. “years on any farm”; “fewer than 10 years of experience” vs. “10 years or less”;  or which producer type (primary producer = principal operator, not to be confused with “principal producer”).

Despite the apparent growth in new and beginning producers, all producers are getting older, and the number of young producers inched up less than two percent.

For more data on producers by age, see the infographics below

All Producers by Age Infographic

All New and Beginning Producers by Age Infographic

Submit a question to FIC Staff