Back to Publications
Cost of Community Services Studies: Making the Case for Conservation

Cost of Community Services (COCS) studies are a case study approach used to determine a community’s public service costs versus revenues based on current land use. A subset of the much larger field of fiscal analysis, COCS studies have emerged as an inexpensive and reliable tool to measure the direct fiscal relationships between existing land uses. Their particular niche is to evaluate the overall contribution of agricultural and other open lands on equal ground with residential, commercial and industrial development.

As of January 2002, 83 COCS studies conducted in 19 states found that tax and other revenues collected from farm, ranch and forest landowners more than covered the public service costs these lands incur. Like traditional fiscal impact analyses, COCS studies show that on average, residential development generates significant tax revenue but requires costly public services that typically are subsidized by revenues from commercial and industrial land uses. The special contribution of COCS studies is that they show that farm, ranch and forest lands are important commercial land uses that help balance community budgets. Working lands are not just vacant land waiting around for development.

COCS studies investigate current land use relationships based on tax and other revenues and public expenditures in a single fiscal period. They are fiscal, not economic, analyses and so do not examine economic benefits or secondary impacts of a given land use to the local or regional economy. For instance, new residential development brings with it new construction jobs, or agricultural businesses generate economic activity directly through the sale of farm products and indirectly through agribusiness sales and services. COCS studies do not analyze these impacts. Other types of studies can provide this information and are an important complement to COCS findings.

American Farmland Trust (AFT) became interested in growth-related issues because agricultural land is converted to development more commonly than any other type of land. According to USDA’s National Resources Inventory (NRI), from 1992 to 1997 more than 11 million acres were converted to developed use-and more than half of that conversion was agricultural land. During that period, on average, more than 1 million acres of farmland were developed each year. The NRI also shows that the best agricultural soils are being developed faster, and the rate of conversion is increasing: up 51 percent from the rate reported in the previous decade. 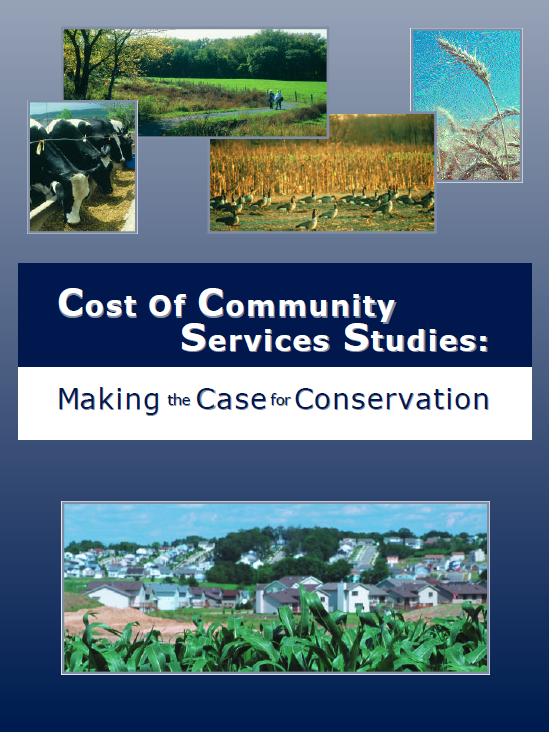