Farming on the Edge - FIC

Back to Publications
Farming on the Edge

American Farmland Trust’s Farming on the Edge analysis shows that between 1982 and 1992, every state lost some of its high-quality farmland, prime or unique, to urban development. Texas lost more prime and unique farmland than any other state (489,000 acres), accounting for 11.5 percent of the total loss in the United States. Other leading states with farmland lost to urban development were North Carolina, Ohio, Georgia, Louisiana, Florida, Illinois, Tennessee, Indiana, and California. When AFT analyzed the country’s 181 geographic regions known as Major Land Resource Areas (MLRAs), 70 percent had high quality farmland in the same areas where rapid development was occurring. The greatest loss of prime or unique farmland occurred in 20 MLRAs representing 7 percent of the land in the continental United States.

Disclaimer: Analysis for this report used data from the initial release of the 1992 National Resources Inventory (NRI). In 2000, USDA revised NRI data for 1997 and previous years, reducing the amount of developed land. 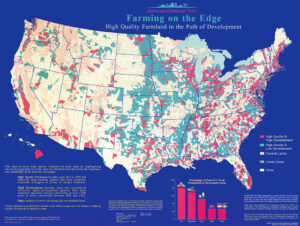