Twitter Code: Growing Opportunity for Farm to School: How to Revolutionize School Food, Support Local Farms, and Improve the Health of Students in New York - FIC

Back to Publications
Growing Opportunity for Farm to School: How to Revolutionize School Food, Support Local Farms, and Improve the Health of Students in New York

In 2018, the state of New York, led by Governor Andrew Cuomo’s No Student Goes Hungry Initiative, created a major new incentive to encourage schools to buy more food from New York farms. This incentive enabled schools that spend at least 30% of their lunch food budget on food from New York farmers, growers, producers, or processors to receive 25 cents per meal in state reimbursement quadruple the 6 cents reimbursement they had received for the past 40 years.

After the first year of this incentive, AFT surveyed over 300 school food authorities, or SFAs, at K-12 schools across the state to learn whether this program successfully stimulated more purchasing of New York grown and raised food. AFT’s research found that 72% of schools felt optimistic that with the right support they would achieve 30% within five years. Achieving this outcome would cause schools to spend nearly $150 million at New York farms over the next five years while increasing access to healthy, New York grown food for almost 700,000 K–12 students by 2024. Conservatively, this would generate over $210 million in economic impact statewide while costing the state just over $94 million over the course of five years in reimbursement and support.

However, schools still face barriers when attempting to buy more New York grown food and reach 30%, and more must be done to help them in order to unlock the incredible economic and public health potential of this program. This report details these challenges, and makes eight recommendations the State of New York can act on to ensure this program reaches its full potential, and for other states to learn from when considering this type of incentive program.

“Growing Opportunity” is made possible thanks to support from the New York State Health Foundation and members of American Farmland Trust. 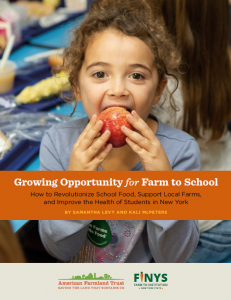