Growing Resilience: Unlocking the Potential of Farm to School to Strengthen the Economy, Support New York Farms, and Improve Student Health in the Face of New Challenges - FIC

Back to Publications
Growing Resilience: Unlocking the Potential of Farm to School to Strengthen the Economy, Support New York Farms, and Improve Student Health in the Face of New Challenges

In 2018, the state of New York created a major new incentive to motivate schools to buy more food from New York farms. This nation-leading farm to school program incentivized schools to increase spending on food from New York farms by promising to quadruple their state per lunch meal reimbursement from 6 cents, where it has been for the past 40 years, to 25 cents if they reached a threshold of 30% spending on food grown or produced in New York for lunch.

In January 2020, American Farmland Trust through Farm to Institution New York State, released the “Growing Opportunity for Farm to School in New York” report, which found that with the right support, this program would incentivize over 70% of schools to spend more of their food dollars on products from New York farms. This sparked policy debates about what that right support should be, which necessitated further research—particularly around how to add other school meals to this program. This subsequent research, conducted by AFT during the summer of 2020, sought to collect new information from schools after year two of the incentive program, including clarifying remaining barriers schools face in purchasing New York food products and reaching 30%, as well as the impact COVID-19 may have on farm to school in New York. The following report presents these findings and encourages action by state and local governments to achieve the full economic and public health potential of this and other farm to school programs in New York to build back better.

“Growing Resilience” is made possible thanks to support from the New York State Health Foundation, the Joyce and Irving Goldman Family Foundation, and members of American Farmland Trust. 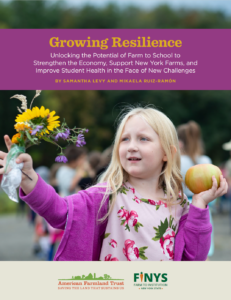